So yes, I got the call yesterday, I got the job!! I was so excited, I cried (after I got off the phone, bien sûr) and shook like a leaf for half an hour. Even though this job is part time, it's with a historical foundation and my job will include working with the public - but a very different public than I saw in my last job. The best part is that the contract is a CDI - a contract of indeterminate time, aka The Golden Ticket! I am beside myself thrilled!

But then, not long after, reality came crashing down. We have one more year before Fry goes to school (remember, children are accepted in maternelle when they are three years old as long as they are potty trained) so there's the question of finding child care. The foundation is open seven days a week, and obviously we won't need care for hours when Stéphane isn't working, but will we be able to find a nounou that will take him for so few hours? We don't have a crèche (full time daycare) or a halte garderie (occassional care) in Tiny Town, and apparently the assistante maternelle lobby is so strong we probably won't be getting either one any time soon, as ridiculous as that sounds. We looked into care at Troyes, but the halte garderies have a maximum of four hours and we don't qualify for a crèche because we live so far away. We are going to contact Fry's last nounou to see if she'll be willing to help us, hoping that since she knows him already she will be more likely to say yes.

So we're trying not to let the stress get to us and celebrate the fact that finally, after six long years, I seem to have found a steady, permanent job. There's a risk I might even like my job. Now there's something I wasn't able to say six months ago!
Posted by Vivi at 4:50 PM 13 comments:

Last week we escaped from home improvements for an afternoon and visited a local chateau, though I must say I'm using this term quite loosely here.

The chateau of Droupt-Saint-Basle dates from the 16th century with some 18th century improvements. The last marquise died in 1974 and the chateau was slated for demolition until the current owners bought it in 1983 and restored it. 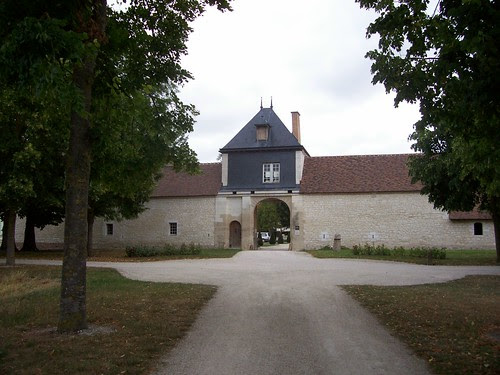 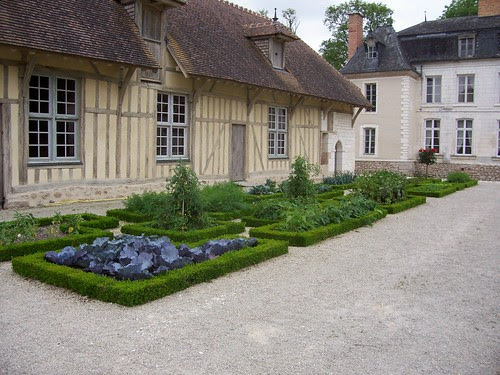 It's quite pretty, and they are quite rightfully proud of their working drawbridge and moat. 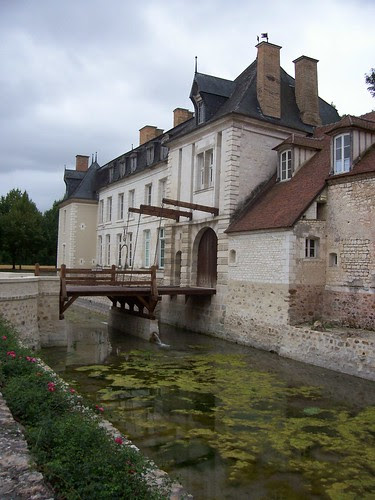 But we passed on the five euro tour, which Stéphane strongly felt would be a lecture on how they managed to restore the place. A small stroll along the road behind the chateau revealed the very important historical jungle gym and medieval swimming pool. But it was nice to get out of the house and chase Fry along a dirt road for a bit, anyway. 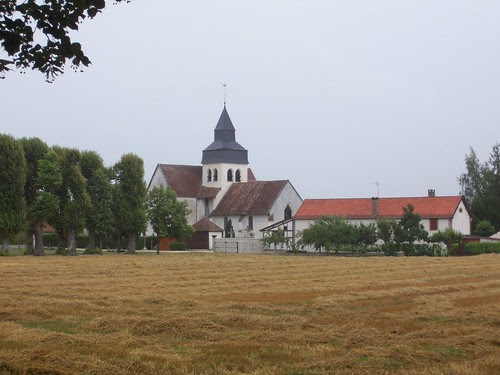 The church that sits in front of the chateau
Posted by Vivi at 2:15 PM 1 comment:

It's amazing how much you can get done without the Internet for a distraction. One week after the move, nearly every box is empty and everything has a home. After years of living with crap piled on top of furniture or tucked under it, We finally have enough storage space. It makes a sizable difference.

The move went smoothly, even if it took a little longer than expected since we only had a huge rented van instead of a moving truck. I was so worried about Fry coming home to a completely new home, but after a moment of panic when he understood what was happening, he settled in perfectly. He has since slept better here than he ever has and the difference has been extraordinary.

We can tell the difference, too. Waking up to a tree-filled park instead of someone else's roof has been simply lovely. No neighbor's dog barking at all hours of the night, no moped-revving for ten minutes non-stop, no more people standing outside our window saying "goodnight" for half an hour at five in the morning. Everyone we've met that lives here or has ever lived here told us, "on est tranquille ici," it's really calm here, but I'm not sure we really believed it until we moved in.

It's not completely perfect. We've got some plumbing issues to sort out, when Fry has a temper tantrum you can hear it all over the building (thankfully he gets over it relatively quickly), and it's going to take a lot of work for Fry to understand that throwing stuff out the door-sized windows is *not okay*. But I think we're going to be happy here.

I got some even better news last week. I didn't mention it here but before we moved I happened across a too good to be true job opening, so I sent in my resume with an explication that we were in the middle of a move and included every single means of communication I could think of. Not only did I get a call back, the job is even cooler than the announcement stated. My interview is next Monday. I really want this job. Please think happy skippy thoughts for me for the next few days!!
Posted by Vivi at 2:07 PM 3 comments:

21 months and a special birthday

As you are reading this, we are in the middle of moving furniture, or cleaning our old apartment, or unpacking in the new one. Today is moving day, but I couldn't let my monthly Fry posts slide.

Poor Fry is having a rough time with the move. This is the only home he's ever known and every time he wakes up from a nap something else is packed up and gone. He's been to the new apartment a few times but I'm afraid he's in for a big shock tonight when he comes home to the new place after spending the day at Mémère's house.

He is inching ever closer to talking and says "ci" for merci and "chee" for cheese, but only when prompted. I was surprised to find this week that he knows quite a few letters (thank you Old School Sesame Street!). As I wrote out the alphabet with crayons, he said quite a few of them before I did. As excited as I am about this I have to admit that I'm starting to get a bit impatient about the talking - come on kid, spit it out!

I also have to mention that today is a very special day for another reason - my very dear Grandma turns 90 today! My family all got together this weekend for a huge celebration and we're so sad we weren't able to get there this year, but we were able to talk on skype on Friday. Grandma is a real inspiration to me and I love her so much! Happy birthday Grandma!!

So we will hopefully have our internet back in less than two weeks, so you be nice while I'm gone, Internet! In the meantime, I'm sure I have some unpacking to do...
Posted by Vivi at 10:00 AM 2 comments: