Whoa. That's definitely the longest this poor blog has ever been neglected! I have some really good news, but I think the way I got from there to here is important, so I'm going to try to keep this brief.

When I last left you, I was looking for a way to get into a bookbinding program. I did contact the national bookbinding school, only to find that they are moving to Toulouse, on the other side of France! I continued looking for other schools, only to get negative reactions wherever I went. Most places were happy to teach me, as long as I was learning bookbinding as a hobby. As soon as I mentioned that I wanted to earn a diploma in order to start my own business, I was practically pushed away, as if the idea of a nearly 40 year old woman learning a new trade was next to impossible, never mind the fact that I'd be taking the place of a young student fresh out of high school who, apparently, has more of a right to be there than I do.

It was a bitter blow, and in the end I had to accept that I just had to let this go. I really had to mourn it for a while, a dream unrealized.

The next step we took was working on opening a boutique in Troyes. I took a meeting with the Chamber of Commerce, worked on a business plan, started contacting suppliers... and finally realized that we would need to borrow a bit more that what we could comfortably borrow without getting in trouble financially if it didn't work. Cross that one off the list.

Meanwhile, I put as many irons as I could in the fire, planning on striking the one that got hot first. I'd been applying to anything administration related in our département, but after a couple of months of not even getting an interview, I opened it up to all the départements around us, after Stéphane agreed that he was ready to ask for a transfer if I could find something full time.

I also decided that I was ready to reboot my craft business. No need to borrow anything, just invest a bit of savings into some materials and get to work. I started working on some embroidery designs and looking for a used knitting machine.

In May, I finally got a hit for a job close to Paris. I received a message from the Pole Emploi (the unemployment office) to go to an interview with an employer at an unemployment office in the Seine et Marne. When I arrived on the day of the interview, a woman told me that the employer had decided to conduct the interviews by telephone and she didn't understand why I was there, and practically accused me of making all of this up (hey, you're the ones that invited me, lady!). After contacting the employer, she asked me to leave my CV and they would call me at the end of the afternoon. Four hour round trip to drop off a CV. By the time I got home, there was a refusal in my email.

That, my friends, is how I spent my 39th birthday. It was definitely the lowest point in this whole journey.

A couple of weeks ago, I did manage to get my hands on a used knitting machine: 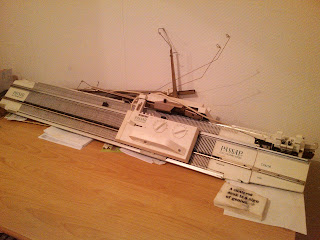 I bought it from a lovely retired lady up in the Ardennes, about an hour and a half north of us. She took amazing care of it, had every single part and instruction book, showed me how it worked, and asked me to keep in touch. There's also a metal stand that it sits on, which needs to be painted. I've just ordered a book from America that explains how to take it apart for a deep cleaning, since it hasn't been used in about 14 years, and then I'll be working on transferring my old medieval bag hand knit patterns to making them on the machine for my craft shop.

I was ready to make a serious go of the online store, but still applying to any and all interesting job announcements, as you never know, right? Stéphane would have to ask for a transfer in December so I figured we had a few months to keep looking. Last week I answered an announcement in Reims that specified spoken English and administration. As usual I sent off my cover letter and CV not expecting anything, only this time I got an email back in less than an hour!

To make a ridiculously long story a bit shorter, we wrote back and forth and agreed on a meeting this past Monday. I had a good feeling about it the minute I walked in the door, and she kept saying things like "You'll be doing such and such... I mean the person that fills this position!" Heh. At the end, she offered me the job. The price is right, even if I have to commute until next summer, and the job sounds interesting and challenging.

It may not surprise you to learn that my new bosses are not French. :)

My new job starts in September. My manager and boss at my old job are being cranky and rude, which is basically par for the course. It's too bad; I would have been happy to stay there, even if it's minimum wage and crap hours, but the environment is just too hostile, and who wants to work like that? My craft shop will still happen, I can't help myself, I still have to create, and I have plans and ideas and designs that have been living in my head for years, and I just have to get them out and share them. Obviously it's going to take me a bit longer to get that going and it will be on a smaller scale than I imagined, but it will happen. 2012 is all about Making it Happen, after all!

Many thanks to those of you that are still around. I plan on showing up here a bit more often than I have been!
Posted by Vivi at 6:40 PM 9 comments: