Stéphane rides in an ambulance and other fun tales

So, let's go way back, a month ago, right before we left on vacation. School had ended but Stéphane continued working five days straight. Finally, Thursday after school ended, he was finally on vacation and spent the day playing on the computer, lounging around, napping, etc. Nothing weird or out of the ordinary.

Cut to midnight, when Stéphane wakes me up saying "there's an ambulance coming." That's exactly how you want to gently woken in the middle of the night, right?

Turns out, he woke up sitting on the side of the bed with his heart pounding hard and fast. Not knowing what else to do, he called the 15 (the French equivalent of 911) and they sent an ambulance (from Troyes, not very reassuring in an emergency!). When they arrived, they took his blood pressure (160/85), asked him a few questions, and called back to the doctor at the hospital, who told them to bring him in. Stéph walked down to the ambulance of his own accord and the last thing he said to me was "don't worry."

He called at 2:30 to say that after an electrocardiogram, a blood test and even a chest x-ray, he was fine but they were keeping him overnight anyway (for a second blood test in the morning). I finally managed to fall asleep sometime after 4:30.

Of course in the morning Stéphane wasn't answering the cell phone, so after chucking Fry out the car to his grandmother and racing downtown to tell work I wasn't working that day (because damned if I can get somebody on the phone grrr), I finally get to the hospital where they told me that unless they had called me I wasn't supposed to be there before 1:30 (even spouses? what the hell is that crap??). But I did get to see Stéphane and he was fine.

Longer story short(er): I hung out at my MIL's until 1:30 and then went and hung out with Stéphane until they released him about 3:00 with a prescription for pills to take in an emergency and a suggestion to maybe see his doctor. Besides the fact that his potassium levels were low, they didn't have much to tell him.

So we bought a blood pressure monitor and Stéphane decided that if his blood pressure was still high in a week he'd see the doctor. All through vacation it stayed around the same (150/160 over 80/90) but when we got home it suddenly skyrocketed to 180/190 over 90/100). He did go to the doctor who put him on a daily pill and ordered a bunch of blood tests. Turns out he's got some fun cholesterol levels, like me.

Well the good news in all this is that we're really making a strong effort to get in shape. Already he's quit smoking (we are both now smoke free!! WOOHOO!!!), cut way back on his sugar intake, and I'm cooking way more veggies and buying lots more fruit, which is all getting eaten! The hard part has been trying to get some sporty activity that we can both do (that we can include Fry in, that's the hard part!). We've been taking about buying bikes for years and it looks like we're going to make that our plan (in fact, we're going to a huge bike superstore this afternoon).

The best part? I can exclusively reveal that yesterday I wore a skirt I haven't been able to get on in nearly a year AND I didn't even have to lie down to zip it up (girls you know what I'm talking about). Let's hear it for losing weight WITHOUT DIETING!!

So I have loads of more things to tell you about our fun vacation but while you're waiting, please enjoy this picture of our very very nearly finished kitchen: 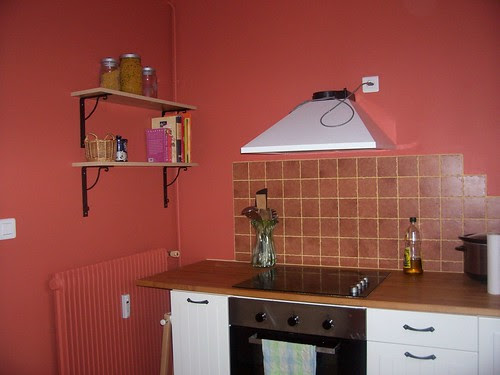