and so it begins

Ok, here's how to do a kitchen renovation in ten days (we hope!!).

First we have to take out the two meter long 40 year old cement counter.

Monday evening, Stéphane took off the doors and we emptied out the cabinets. 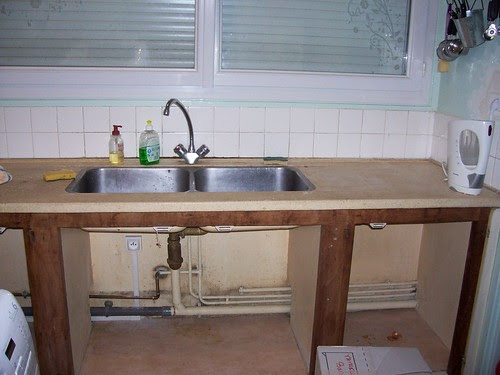 Tuesday morning, Stéphane and our friend Marc did the rest of the destruction. First, the wood comes off: 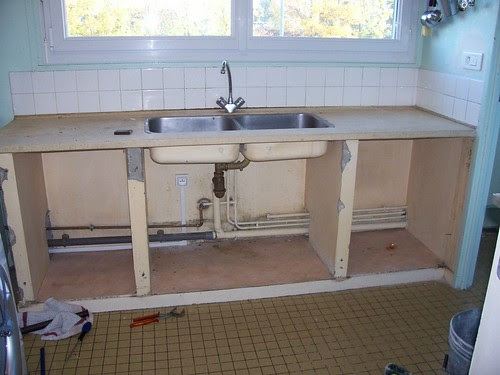 Then out comes the sink, and thanks to some power tools, a couple of crowbars and some big nasty sledgehammers, the rest broken down and carried out. 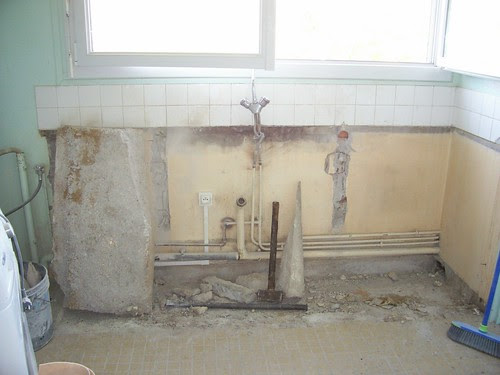 Stéphane and Marc are currently carting the remains to the dump and this is what my kitchen looks like right now: 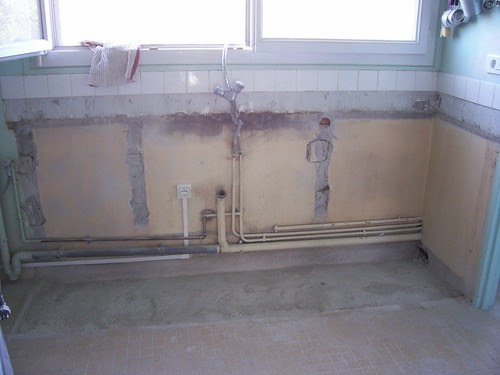 Tomorrow, Stéphane will top up the big hole with some cement to even it up, and then Thursday it's off to IKEA to pick our new kitchen! Woo!
Posted by Vivi at 2:48 PM 1 comment:

So, did you hear there was a strike?

Heh. Sorry about the long time, no post. October kind of got away from me, thanks to the pressure of getting my first guided tours under my belt. I finally did them at the end of last week, and apart from some gentle corrections on pronunciation they went just fine.

Work has been ok, I'm completely torn in my feelings about it now. On the one hand, I really am absolutely thrilled to be working there, it's such a great chance to work for a historical association and the work isn't difficult and it's lovely to talk to people that visit us from around the world. I've talked to some Americans, British, Australians, Japanese, Russians, as well as the much less surprising Belgians, Germans, Italians and Swiss. However, my colleagues are not always super awesome and that is really sucking a lot of the pleasure out of work. When your colleagues are constantly griping about each other and complaining to the direction about ridiculous, petty stuff, it's just not a good time. The best I can do is just stay out of it as much as I can and just do my job.

In other news, you may have heard something about the strikes happening in France. I won't get too much into the politics of it but it's basically a reaction to the retirement reforms, which many people feel is the straw that broke the camel's back in a long parade of reforms, which has lead to the people in the streets and the oil refinery blockades. The lack of gas has hit us here in Champagne, especially in Troyes but even here in Tiny Town, where gas has been rationed at 25€ per transaction. Since they raised the prices, 25€ doesn't go as far as it did a week before, and it certainly won't fill up an empty gas tank (maybe a third, with the raised prices). I was lucky and still had a good bit of gas before I filled it up at the beginning of last week and only drove to Troyes for work last week. I'll be going to the grocery this afternoon and will mostly likely fill 'er up again, since things still seem to be going slowly on the refinery front.

This week and half of next week is the Toussaint (All Saint's Day) holiday. Fry and I were meant to go visit our friend in Zurich again for a couple of days while Stéphane ripped the kitchen apart but with the uncertainty of the gas situation we canceled, much to my disappointment. We were afraid that this would even affect whether or not we'd redo the kitchen at all, since we need to rent a truck to pick up the kitchen from IKEA, but in the end we decided to go forward. Stéphane is, right this moment, doing a bit of plumbing work replacing a leaky copper pipe in the laundry room (he had shown his soldering work to the guy that did our electricity, who said it was good enough that he would hire him!) and tomorrow he and a friend will break out the hammers and crowbars to destroy our cement cabinets. This behemoth is terrifying - it was poured into place when the apartments were built in 1970 and is two meters long with a stone counter top. One of Stéphane's colleagues lived in these apartments many years ago and yanked out his cement cabinets as well and gave us some great advice and I think Stéphane is more than ready to swing that hammer around. Thursday we'll head up to IKEA and buy our kitchen (and I will restrain myself from buying the entire toy section for Fry's upcoming birthday!) and then the really fun part begins.

And finally, as an aside, today is my Dad's birthday and he would have been 70 years old. I remember the first time I saw him after he's been diagnosed and even though he knew the cancer was terminal, the doctor was hopeful that they'd been able to prolong the inevitable. "I might even make it to 70," he said with a smile. I sure as hell wish you had, Dad.
Posted by Vivi at 1:32 PM 3 comments:

Yesterday Fry turned 23 months! One more month to the big TWO! I can't believe it!

This has been another big month for Fry. He's really starting to talk more, trying out words like "chaussures" (shoes), "banane" (banana), milk, socks, scissors, etc. If we ask him to say something he doesn't always try, but he'll randomly say a word when you're not expecting it, and considering it can be in either French or English, we don't always catch it!

Now in addition to knowing the alphabet, he has nearly got counting to ten down, at least up to seven in French. He loves to count on his fingers with us and knows to use both hands.

We also seem to be done with sippy cups! Don't get too excited, as he still takes his milk in a bottle (to those of you with bottle fed babes, when did you cut out the bottle? I've tried straws but he doesn't seem to get the concept), but at dinner time he now has his own little cup and can drink a little at a time.

Finally, we have actually started introducing the potty. Yep, we know we're crazy! Since he's going to nounou's house once a week and the other kids are either trained or in training, we hope that he'll get interested in the idea. MIL is also in on the act and has had good results, and we've had some good results as well. We don't expect him to get it anytime soon but if we can get consistent about it maybe it will click, who knows? We're trying to keep it light and casual. (I cannot believe I just described potty training as casual. WTF??)