Just a friendly reminder for those that are participating in Tricot du coeur that we have seven weeks to finish up our blankets and get them sent in. Yes, I said "we" because I haven't finished mine yet! In the beginning I thought "seven months? I have tons of time," so I worked on it a little here and there between other projects. Now that we're getting closer to the end I'm paying much more attention to my project! Here's the latest mitered square I've done: 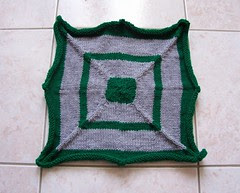 This is the best seaming I've done so far. One of the seams on another square looks so bad (especially next to this one!) that I think I'm going to rip it out and do it again. I have two more miters to make, which I hope to have done by the end of the month, and then I just have to decide on the border. I could get it done sooner, but I'm still working on other little projects at the same time. I did try working non-stop on miters and I found that I stopped paying attention to what I was doing and ended up having to frog a whole corner, so I learned my lesson!
Posted by Vivi at 3:33 PM